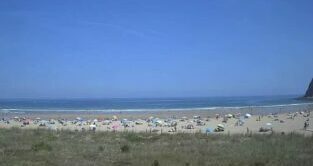 The Spanish sandy beach Playa de Rodiles is a popular destination among tourists in the north of Spain in the region of Asturias. It is located on the Atlantic coast and every year it delights numerous vacationers who enjoy their stay between walks on the beach, sunbathing and water sports. With our webcam Rodiles you can always take a look at the pleasant weather and the beautiful landscape of this tranquil coast and get inspired for your next vacation.

The beach, which is about one kilometer long, has a steady, reliable swell that makes it one of the most popular destinations in Spain when it comes to water sports, especially among surfers. The beach, which is well developed for tourism, has a picnic area, restaurants, toilets and a rescue team with a Red Cross first aid station, offering everything that is important for a successful and safe vacation. In addition to numerous other premium beaches, you will find the town of Villaviciosa with 14000 inhabitants nearby. The big city Gijón is located a bit further west and invites you for day trips. The surrounding area is characterized by forests, agriculture and small villages as well as the river Villaviciosa.

If you want to take a look at the weather that you will find in Rodiles, then we offer you, in addition to the webcam Rodiles, a weather radar that always keeps you informed about all the important weather events. So you can foresee upcoming rainfall and storms in advance and plan your vacation perfectly. The weather radar shows you the wind strength, rain and thunderstorms by colored symbols and is intuitively understandable. The darker and bluer a rain area is, the heavier the precipitation is. Wind strength and direction are indicated by arrow symbols.

The biggest attraction of Playa de Rodiles is the Atlantic Ocean, with its reliably high-quality swells. The beach is one of the four best surfing beaches in Europe and attracts numerous water sports enthusiasts every year. In the surrounding area there are numerous hiking trails, swimming beaches and the opportunity for boat trips and deep sea fishing. The large port city of Gijón attracts visitors with numerous attractions such as museums, delicious gastronomy and the architecturally impressive Universidad Laboral de Gijón.