There is hardly any weather phenomenon that excites us as much as thunder and lightning. Since ancient times, humans have been trying to fathom the background of this phenomenon. But unfortunately, there is still much about this natural phenomenon that remains elusive to this day.

Do you want to find out where it is currently lightning? Or just figure out if you will be affected by a thunderstorm soon? Then you should use our lightning strike map for the USA and Canada! It provides you with accurate information about thunder and lightning in your region and is updated every second!

Tracking the current lightning front – How to read the lightning map:

The lightning map shows you current thunderstorms in color. The strength of the thunderstorm is measured with the help of precipitation as also with our storm radar. Blue or green color indicates a relatively weak thunderstorm or weak precipitation.

Caution is advised in case of yellow, orange, red, and especially purple coloring:

A lightning front of this type involves a clear risk of severe weather. On the lightning map, you can also see small flashes of lightning, which are indicated by a short, white flash. Each of these flashes signals a single lightning strike.

To display the temporal course and direction of the lightning front, simply click on the cursor symbol. This way you can see exactly how the thunderstorm has developed over the last hours and minutes and infer where the thunderstorm will move on to.

Here is what you need to know about thunderstorms and the lightning radar! 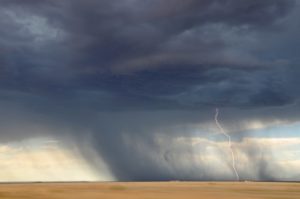 The great advantage of our lightning strike map is that thunderstorms and lightning are displayed with a very short delay. The measuring technique of the lightning radar makes the decisive contribution here: Each lightning/lightning strike emits an electromagnetic wave that propagates over hundreds of kilometers. This wave arrives at different radar stations at the speed of light. Due to the different arrival times (in the range of milliseconds) of the electromagnetic wave, precise conclusions can be drawn about the impact location and the strength of the lightning.

This allows you to locate lightning “live” and in “real-time” yourself.

How do thunderstorms form?

The driving engines for a thunderstorm are high solar radiation, water evaporation, and the resulting formation of a cloud (more on cloud formation here). The friction of the water molecules in the cloud creates a high electrical voltage, which is balanced by the discharge of a lightning bolt. This discharge can occur both by a lightning strike to the ground or to another cloud.

And by the way:

The thunder is caused by the sudden expansion of the air in the immediate surroundings of the lightning – it can reach temperatures of up to 30,000 degrees Celsius and is only a few centimeters thick!

Lightning strikes – how do I behave?

that is the length of the longest lightning ever measured.

Generally, you should seek shelter as quickly as possible at the first sign of thunderstorms since lightning can travel many kilometers. Thus, there is danger even before the thunderstorm is in proximity. The safest place to hide during a thunderstorm is in a house or vehicle. If you are outdoors during a thunderstorm, be sure to stay away from trees, hills, lakes, and rivers. Power poles are also popular targets for lightning strikes – so you should keep your distance from these as well. Ideally, find a dry hollow, crouch down, and encircle your legs with your arms. It is best to stay on your toes. This way, in case of an impact in the immediate vicinity, you offer the smallest surface for the lightning to strike and prevent large voltages from flowing through your body.

The distance of the thunderstorm

…that is how fast thunder moves towards you.

If you are aware of this, measuring distance will be a breeze for you. Just count the seconds between the lightning and the thunder. Then, divide the number of seconds by three and you have figured out the distance to the thunderstorm in kilometers:

Example: 12 seconds pass between lightning and thunder – 12 seconds divided by 3 equals 4 – that means the thunderstorm is 4 kilometers away.