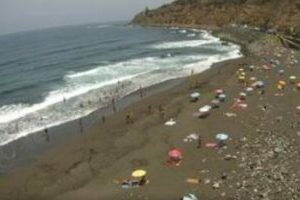 With an area of 2,034 square kilometers Tenerife is the largest island of the Canary Islands and at the same time best developed for tourism. Annually, about 1.5 million people find their way to the island paradise. The locals, on the other hand, are outnumbered by just under 950,000 people. Are you planning a trip to Tenerife yourself? We’ll make sure you can see what life is like there in advance with live images. Our webcam Tenerife is ideal for this.

Teide, a dormant volcano, is not only the highest peak on the island, but also in all of Spain. It dominates Tenerife and is an imposing natural spectacle. The Canary Island is also famous for its carnival. Every year, the event attracts countless people to Santa Cruz to celebrate a great festival with music, masks and parades. Equally fascinating are the black and white beaches and beautiful natural landscapes. Sports enthusiasts also get their money’s worth. That’s why Tenerife is a year-round Mecca for active vacationers and sun worshippers. The island is 1,274 kilometers from the Spanish mainland.

Our webcam in Tenerife gives you a revealing insight into the weather conditions on the ground. If you are interested in the precipitation on the island, the weather radar is the perfect solution. The radar shows where and how much precipitation is currently prevailing or the sun is shining. The amount of rainfall can be recognized by different colors. Green and blue areas indicate little to light precipitation. Red and purple, on the other hand, stand for a high amount. The weather radar also shows a forecast of the weather situation.

The climate in Tenerife

Tenerife is affectionately known as the island of eternal spring. This is due to the fact that the climate is pleasant and mild all year round. From January to December a bathing vacation is possible. Nevertheless, the best time to travel is in the months from May to August. With temperatures of up to 29° Celsius, it is warmest there at this time. The water temperatures also reach their highest values during this period. The probability of rain is just two days per month. However, there are small climatic differences between the north and the south of the island. In the north it is usually a few degrees cooler and the probability of rain is slightly higher. This is due to the trade winds as well as the high mountain range.

Tenerife offers an entertaining program to all tourists – every day. In many places of the island you can feel the breath of bygone days through historical buildings. The colonial town of San Cristóbal de La Laguna, for example, is an exciting excursion destination. A climb to the highest mountain in Spain is also worthwhile. The Teide National Park is the most visited national park in Europe and absolutely impressive, not only because of its volcanic structure. A highlight is furthermore sailing with dolphins and whales. Tenerife will exceed your expectation. With our webcam Tenerife you can already be enchanted.