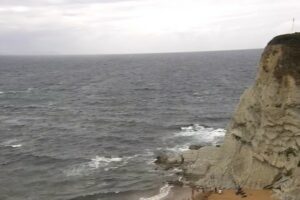 Sopelana is a municipality located in the Basque Country in northern Spain. It covers an area of 8.39 square kilometers and has a population of about 14,000 people. The municipality forms a suburb of Bilbao and is known, among other things, for its sandy beaches. Precisely because of its border with the Cantabrian Sea, the municipality is dominated by spectacular rocky coasts and enchanting beaches. Therefore, Sopelana is an ideal destination for all sun worshippers who love to unwind. Want to take a look at the idyllic municipality? Our webcam Sopelana guarantees you daily stunning live images of the suburb of Bilbao.

Due to its proximity to Bilbao, Sopelana is a perfect destination for a city break. The suburb and the big city are connected by metro. So you can get on the train relaxed and travel to Bilbao. In Sopelana itself, besides the cliffs and sandy beaches, there are nice cafes for relaxing hours with friends and family. Furthermore, the northern winds allow for thrilling activities at airy heights, such as parasailing or paragliding. By the way, Sopelana is one of the municipalities in Spain with the highest per capita income.

Find out about the weather conditions in the Spanish municipality. Just use the weather radar to get all relevant data. Here you can get daily updates on precipitation, sunshine, wind and weather. The color stripe helps you to see the weather situation. If you see blue and green areas on the radar, light precipitation is expected. Yellow and orange mean moderate intensity of rain or snow. Red and purple areas mean heavy precipitation is coming to locals and visitors. A lightning symbol indicates thunderstorms with lightning strikes.

The climate in Sopelana

Due to its location in the northern hemisphere, Sopelana enjoys the Mediterranean climate. Therefore, it is equally warm and temperate throughout the year. Rough winds are not uncommon, as well as frequent rainfall. Nevertheless, it is pleasant from July to September. The average temperature in August, which turns out to be the warmest month, is 23° Celsius. The water temperature is similar, settling between 20° and 22° Celsius during the summer months. The coldest month is January with an average of 11° Celsius. November tops this list with just under 16 rainy days per month.

Wondering what attractions are hot in Sopelana? A trip to the beautiful sandy beaches is always worthwhile. With the beaches Barinatxe, Arrietara, Atxabiribil and Meñakoz, the municipality has four sections to choose from. In the same way, paragliders find great pleasure in Sopelana. During the flights through the air you will feel pure adrenaline. In the evening, Brenda’s Isle invites you for cocktails, beer and wine. Get a picture of the community for yourself thanks to our webcam in Sopelana.