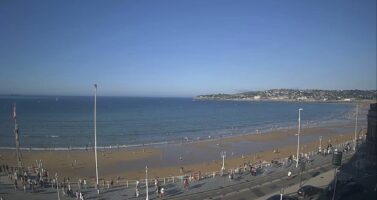 Gijon was once the center of industrial development in the region. But today, smoking smokestacks no longer greet from the city, but yachts and sailing ships. With around 275,000 inhabitants, Gijon is the largest city in Asturias. The people live together on an area of 181.6 square kilometers. Despite the many white sandy beaches, the city has so far been spared from mass tourism. Mostly the locals themselves or day tourists can be found on the beaches. Gijon is a coastal city in the north of Spain with a charming stretch on the Bay of Biscay. Discover our webcam Gijon and bring the Spanish lifestyle home to your screen.

The port city scores with many small cafes and a historic old town. Strolling through the narrow streets you will enjoy your time as well as excursions to the baroque palace or the Roman thermal baths at Campo Valdés. For gourmets, the coastal city is a particularly good place. Not only the sparkling cider Sidra provides for exuberant moments of pleasure, but also the specialties of the Asturian cuisine. Oviedo, the capital of the province, is just 30 kilometers away. We create with our webcam in Gijon the possibility to get to know the local life.

What is the weather in the Asturian coastal city? We have the answer. You can see the live images on our webcam or use the weather radar. Especially with regard to precipitation, the radar is a good option. By means of a color scale you can see where the sun is shining or rain is falling. The intensity of the precipitation determines the colored areas on the radar. Little rain or snow is indicated by blue, green and yellow markings. Areas colored red or purple indicate heavy precipitation. If you see a lightning symbol on the radar, a thunderstorm is about to hit here.

The climate in Gijon

The port city in the north of Spain has the Mediterranean climate. Summer is short, pleasant and dry, while in winter it is wet, cold and windy. Sometimes it is even cloudy all year round. The best time to travel is from June to September. Here the temperature reaches its highest values. The thermometer shows up to 23° Celsius. The lowest temperatures in these months are around 17° Celsius. The coolest months are from November to March. The average temperature here is 7° Celsius.

There is a lot to see and do during your vacation in Gijon. The Playa de San Lorenzo, for example, invites you to spend relaxing days by the sea. Culturally, the Parque de Cerro with underground tunnels and the sculpture Elogio del Horizonte are worth seeing. In addition, three major festivals take place in August. The Día de Asturias, Semana Grande and Fiesta de la Sidra Natural invite you to celebrate, feast and get to know each other.