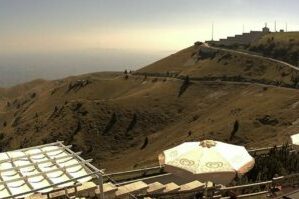 Monte Grappa, at 1,775 meters, is the highest peak of the southernmost group of the Dolomites. The mountain massif is embedded by the rivers Piave and Brenta and belongs to the Vizentine Alps. At the foot of the mountain lies Bassano del Grappa, a picturesque town with about 43,000 inhabitants. From the tranquil little town, you can reach the summit via a well-maintained 30-kilometer road. We have installed a webcam high up on Monte Grappa, which provides you with impressive images in real time. Enjoy the view with our webcam Monte Grappa.

The mountain massif gained historical fame during the First World War. Monte Grappa was one of the battlefields of the so-called Piave battles. Thousands of soldiers from the Italian and Austrian camps lost their lives here. For the fallen, a monumental memorial was erected on the summit in the 1930s. Monte Grappa is very popular with racing cyclists. Every day, especially in the evenings and on weekends, numerous cyclists answer the call of the mountain.

With the webcam for Monte Grappa you get an overview of the weather situation on site on the summit and in the surrounding area. Furthermore we offer you a weather radar. This provides information about the precipitation around the mountain massif. Depending on the color you can see the intensity of the precipitation. In blue and green areas the amount of rain and snow is low. Red and purple markings, on the other hand, indicate significant precipitation. In the same way, a thunderstorm with lightning strikes is indicated. You will then see a lightning symbol on the radar.

The climate in Monte Grappa

High up on Monte Grappa, the climate is Mediterranean. Summers are dry and warm with an average of 26° Celsius in the period from June to September. August is at the top of the list with temperatures reaching 30° Celsius. Furthermore, there is hardly any rain during the summer months. The coolest month is January. The temperature here drops to an average of 13° Celsius. However, the number of days with precipitation increases. It can rain or snow on up to 14 days a month. With 12 hours of sunshine per day, May, June, July and August take the lead in this category.

Whether by car or as part of a hike, it is worthwhile to climb to the top of Monte Grappa. Especially on a clear day, you can expect a panoramic view all the way to Venice. The summit region itself, however, may only be entered on foot due to the requiem for the fallen soldiers. Monte Grappa is also a popular starting point for paragliders.