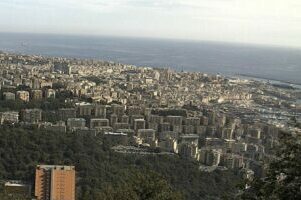 The Italian city of Genoa is the capital of the Liguria region and is located on the Ligurian Sea in the northwest of the country. With its approximately 575,000 inhabitants, Genova is the sixth largest city in Italy and is especially known for its port. Discover with our webcam Genova the unique city, which has a successful mixture of the old, modernity and charm.

This uniqueness is evident, among other things, in the old town, which was declared a World Heritage Site by UNESCO in 2006. Numerous buildings from the Renaissance and Baroque periods still remind us here of those times.

With our live images from the webcam Genova you get a comprehensive overview of the current weather conditions in the city. In addition, we provide you with a weather radar, which gives you comprehensive weather forecasts. All current precipitation areas are also displayed, which are marked in different colors depending on their intensity. Light precipitation is marked in green and blue, whereas areas highlighted in red and purple indicate high amounts of precipitation. Predicted thunderstorms are also symbolized with lightning on the map, so you are always well informed about the weather in Genova with our weather radar.

The climate in Genova

Genova has a temperate maritime climate with influences of the Mediterranean climate. The Atlantic winds of the western wind zone also influence the climate and provide average annual temperatures in the city, which average 15.6 °C. January is the coldest month with an average temperature of 8 °C, whereas July is the warmest with temperatures averaging 23.9 °C. In addition, the climate in Genova is characterized by a steady wind that blows mostly from the northeast during the winter months. In spring, as well as in autumn, a warmer southerly wind is predominant. The annual precipitation in Genova is 1072 mm, with July being the month with the least precipitation. On the other hand, the months from September to November have the highest precipitation.

The city is known, among other things, for its ancient port, which made Genova one of the most powerful trading cities in the country in the Middle Ages. What was once the center of trade and commerce has now been transformed into a lively cultural center as well as a tourist port with numerous yachts and boats. With versatile museums and one of the largest seawater aquariums, the old port has now become a popular tourist attraction throughout northern Italy. Also worth seeing is the alleged birthplace of Christopher Columbus, as well as Genova’s charming old town, which will enchant you with time-honored buildings and squares such as the Cathedral of San Lorenzo, the Palazzo Ducale and the Piazza San Matteo. Of course, a visit to Genova should not miss the culinary highlights of Italian cuisine that await you in the numerous bars and restaurants of the city.