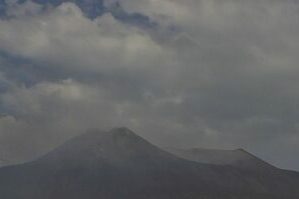 Our webcam Etna offers you breathtaking images of Europe’s highest volcano. With a height of 3357 meters, Etna rises in the east of Sicily. The volcano, also affectionately called “Mongibello”, is a World Natural Heritage Site and is also one of the most active volcanoes. Etna has several craters and occupies an area of 1250 square kilometers. The circumference measures 250 kilometers.

Etna is exposed on all sides and is located in a zone of increased seismic activity, because here the African plate pushes under the Eurasian plate. Frequently, fissures rupture, from which lava escapes. The escaping lava has a relatively thin character. Unlike Vesuvius, Etna does not belong to the explosive volcanoes, where during an eruption the whole volcanic cone sometimes flies into the air. Last but not least, Etna, with the cities of Catania and Taormina, forms one of the main tourist destinations in Sicily.

With our webcam Etna and its weather radar, you will always know in real time whether Etna is currently emitting ash and smoke or is calm and can be climbed as part of a guided tour. Thanks to our simple color scale, you can immediately see on the weather map where and in what intensity precipitation is falling and how strong the wind is blowing. Also thunderstorms are easy to recognize by the lightning symbol. Mostly, however, the weather on Etna is bright and sunny.

The climate around Etna

Thanks to the fertile volcanic soil, the soils around Etna are very fertile. Wine and citrus fruits in particular are grown here. Overall, the climate is subtropical with hot summers and mild winters. However, Etna has its own microclimate. Due to its considerable altitude, it is about 10 to 15 °C colder there than in Catania, for example. Snow can still be present on Etna well into March and April. Beyond Etna, summer temperatures in Sicily range from 28 to 40 °C. Precipitation is very sparse in summer and is concentrated in the winter months. The sunshine duration per day is about seven hours. The air humidity usually takes on pleasant values. On average, it rains 4.7 days per month, but in December it rains up to nine days.

Etna itself is the biggest attraction. It is best to climb it as part of a guided and informative tour or on your own, taking into account the prevailing weather conditions. A road and a cable car make Etna relatively easy to access for tourists. Hike through the Valle del Bove on the east side of the volcano and visit the Grotta del Gelo, where even small glaciers have formed. Probably the most spectacular view of Etna can be enjoyed from the Roman amphitheater in the pretty town of Taormina. But also Catania with its many baroque churches is definitely worth a visit.