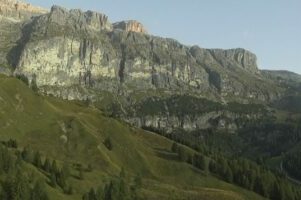 Surrounded by peaks of the mountainous landscape designated by UNESCO as a World Heritage Site, Arabba, a mountain village in the Fodom Valley in the middle of the Dolomites, offers breathtaking scenery. Steep rock formations, flowering meadows, shady forests and snow-covered peaks characterize the alpine landscape. At the foot of the Sella massif and the nearly 2500 meter high mountain Col di Lana, Arabba defies wind and weather. From here you can admire the specific flora and fauna of the Alpine region in peace. You can follow the weather through the webcam Arabba.

Various paths lead through forests, along meadows and streams or over mountain passes to the peaks. You may also encounter marmots and deer, which can be seen here in their natural habitat. The small town in Veneto and its surroundings are considered a paradise for sports enthusiasts. Whether on foot or by bike, Arabba offers numerous opportunities to breathe Italian mountain air. The Dolomites are not only beautiful, they are a piece of unique nature.

A visit to the Dolomites can happily be accompanied by unsettled weather. To ensure that you can travel safely during your stay, check the Arabba webcam and the corresponding weather radar at any time for the current weather conditions in the mountain village. You can see from the coloring where the sun is shining right now or where precipitation can be expected in the next hour or two. Red and purple indicate heavy precipitation, while blue and yellow hues represent low amounts of rain.

The climate in Arabba

Arabba is located in northern Italy and belongs to the Middle Latitudes climate zone. The warmest month is July, when daytime temperatures reach 29 °Celsius. The coldest month is January, which has daily temperatures of around 6 °Celsius. The average annual temperature is 18 °Celsius. The vegetation of this climatic zone is semi-annual, with deciduous deciduous and mixed forests. In spring, the plants sprout fresh. In autumn, a typical foliage discoloration and leaf fall appears.

Arabba is worth a visit at any time of the year. In summer, activities such as hiking, climbing, mountain running or mountain bike tours in the Dolomites are inviting. Guided tours are offered especially in challenging areas. In winter you can ski and snowboard, go snowshoeing or ice climbing. Events also take place around the year. Plan your tour with a view of the weather via the Arabba webcam. The Andraz Castle, the Ladin Museum, the memorials, churches and chapels, the Old Mill, the museum and the memorial on the Pordoi Pass are very special sights of the region.