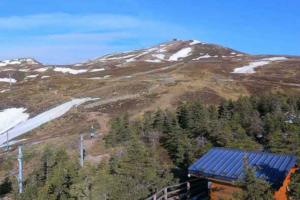 Sancy is a small place in France located in the Grand-Est region and Meurthe-et-Moselle department. It lies in the Bourgogne region and the capital of Bourgogne is Dijon. The latter is approximately 121 miles away or 195 km from Sancy. Sancy is about 117 miles or 188 km away from France’s capital, Paris. Puy de Sancy is the highest peak in the Massif Central. Known as the “Mount of the Cross”, Sancy was a stratovolcano that ceased to be active 220,000 years ago. Let’s take a look at the webcam Sancy!

The result of volcanic eruptions, lava flows, glaciers, and erosion led to this incredible relief making it a worth-visiting spot. Puy de Sancy is 6,184 feet or 1,885 m in length. Cable cars were constructed in 1936 to link Mont-Dore and one of the needles at the bottom of the summit. From Puy de Sancy, four valleys branch off: Chaudefour, Biche, Fontaine Salée, and Dordogne. In the northern part of the valley, two streams called the Dore and the Dogne join together to form the Dordogne, which flows through Mont-Dore and into the Gironde estuary. If you want to visit Sancy, the best time is from June to September. For more information related to weather and climate take a look at the below sections covering the weather Radar and climate of Sancy.

With a mouse click (smartphone: change the view simply by tapping) you can move the webcam in the direction of your choice. By turning the mouse wheel or zooming with your fingers, you can zoom in on the webcam. Alternatively, you can also use the buttons for this purpose.

The location and the prevailing winds coming towards the Sancy are responsible for bad weather from January to April and October to December. You might want to explore this place when its weather is pleasant. Weather Radar Live helps you navigate its weather. From cloud cover to thunderstorms, precipitation to tornadoes, it analyzes all the details to offer you accurate information. You can zoom in or zoom out to reach the exact spot or to know the weather changes in detail. So, keep yourself updated about the weather and get the weather forecast right away.

The Climate in Sancy

According to the Köppen-Geiger classification, Puy de Sancy has a warm summer and temperate oceanic climate. Let’s explore the climatic changes at Sancy.

In Puy de Sancy, the maximum temperature ranges from 4°C in January to 23°C in August (average maximum 14°C).

A minimum of 73mm falls in September and a maximum of 152mm in May, with an annual rainfall total of 1290mm.

The average humidity remains approximately 91% throughout the year.

On the southwest slope of the Sancy is another ski resort, Super-Besse offering 125 km of cross-country skiing and 43km of the downhill ski trail. It is the perfect spot for adventurous outdoor activities like hiking and mountaineering. Several ski lifts and cable cars ascend the mountain’s northern and southern slopes, making its slopes perfect for skiing.

Across 120km of trails, cross-country skiers are able to navigate between sparkling mountain lakes. The ski area enjoys a lot of sunshine due to its southerly orientation, which is particularly appreciated for giving the region’s cold winters and harsh winds. Super Besse offers night skiing on floodlit slopes, as well as snowshoeing, tobogganing, and even biathlon courses.