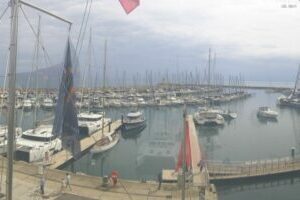 La Grande-Motte, a commune in the Hérault département, is a famous seaside resort in the Languedoc-Roussillon region in southern France. With a nice beach and harbor, it stands out among the other developments along this coast. A large part of the Grande-Motte consists of hotels and buildings dating back to the 1970s. It has a seven-mile-long sandy beach and an array of accommodations.

The La Grande Motte focuses on water sports and architecture. In addition to being a favorite spot for beach-lovers, it is also popular with those who love leisure and design. From sailing to boating and water skiing, it offers many activities. It lies in the heart of the Mediterranean coastline and has an adequate climate due to its average 300 days of sunshine annually.

With a mouse click (smartphone: change the view simply by tapping) you can move the webcam in the direction of your choice. By turning the mouse wheel or zooming with your fingers, you can zoom in on the webcam. Alternatively, you can also use the buttons for this purpose.

The Climate of La Grande Motte

An average temperature of 38°F to 84°F is typical for the region throughout the year, and it rarely falls below 29°F or rises above 90°F.

July is the clearest month in La Grande-Motte, with on average 80% of the days being either partly cloudy, mostly clear, or clear.

La Grande-Motte experiences the most cloud cover in November, with 46% of days being cloudy.

There are 9.6 days per month in La Grande-Motte that are muggy or worse in August.

The Camargue Regional National Park is a vast and wild park in Europe located close to the mouth of the Rhone. Since it is home to fauna and flora, it attracts many birds. Throughout the ornithological park, visitors can observe and photograph these birds up close. A total of 85,000 hectares are occupied by this regional nature park. This region is known for herding horses and cattle. You will experience an unforgettable horse riding experience in Camargue Regional National Park. Besides, if you are a fan of seafood, you will love enjoying fresh seafood here.