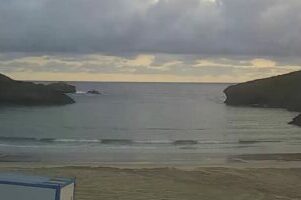 The charming fishing town of Llanes is located in the Spanish region of Asturias on the eastern Costa Verde. Among other things, the town is known for its historic, listed old town, in the center of which is a dreamy harbor. Get to know the Spanish town, which has managed to preserve its original character and charm to this day, with our webcam Llanes.

A view inland from Llanes opens up a fascinating mountain panorama. Because in the midst of the picturesque green coastal landscape, the town of 13,000 inhabitants is located at the foot of the karst mountains Picos de Europas, whose rock formations are up to 2,700 meters high.

The climate in Llanes

Llanes is characterized by its ocean climate. Temperatures average 16 °C, with August being the warmest month with an average of 22 °C. During the winter months, temperatures drop somewhat, falling to an average of 10 °C in January, the coldest month. Over the year, it rains an average of 442 mm, with the summer months being the driest. The water temperature of the Atlantic Ocean in Llanes ranges from 13 °C to 23 °C.

Tenerife offers an entertaining program to all tourists – every day. In many places of the island you can feel the breath of bygone days through historical Discover the different buildings of the listed old town and let yourself be enchanted by the dreamlike scenery of the harbor with its colorful fishing boats and the closely packed houses on the water. Also worth seeing are the church of Santa Maria, the numerous city palaces and the old city wall, which is still partly preserved. A successful refreshment in the Atlantic Ocean awaits you at the fantastic beaches, which are located in the immediate vicinity of Llanes. A special view over the coastal town, the blue sea, the picturesque rocky bays and the green mountains you will get during a walk along the coastal paths Paseo de San Pedro or Senda de la Costa. The coastal paths can be explored not only on foot, but also by mountain bike. Also worth a trip is a tour into the mountains of the Picos de Europa. Also the impulsive Cares Gorge in the middle of the mountain range invites with its hiking trail along a water channel through numerous tunnels and over bridges to an unforgettable hike in the middle of the mountainous landscape.